Welcome to the NEW BLOBlog!!

You guys, loyal fans and followers. Old is new again, so now I'm necro-ing the old HeroBlog and respawning it! That's really the theme of the whole blog, and in large part of my superhero art stuff in general: what's old is worthwhile, so why not re-examine it, revamp it, recreate it anew?

So here we'll go, with a new blog full of new stuff and what it has to do with old stuff. We're just past the 17th anniversary of my creation of Cloudman, world's greatest hero and maker of clouds. Hero BLOB (née BLOB) came mere months later. I've created content for these fellows, their friends, and their worlds ever since, and there's a lot to look at!

Photo: hand-painted resin minifigure of Cloudman, 2016. Newly molded from a figurine created in 2001 from Crayola Model Magic, used in the Cloudman-Obakemono Board Game (which was co-created by Schedel Luitjen and Nicolas Nadeau) 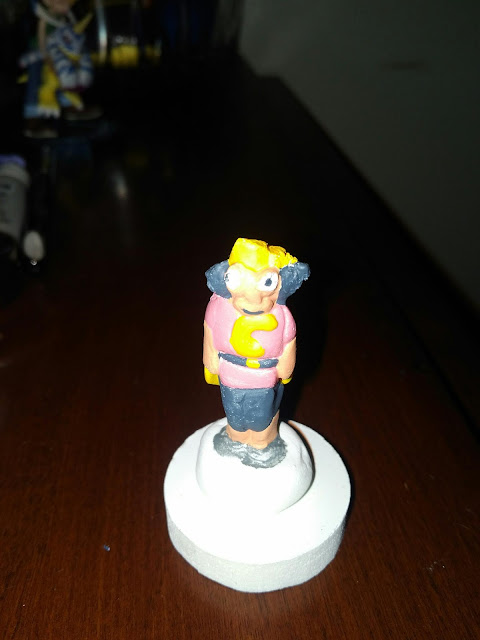 Please see my NEW BLOG from now on!

Dear Friends,
I'm switching from this blog to a new one-- www.schedel.tumblr.com . Follow the link for all of your favourite old posts and all forthcoming new posts concerning BLOB and Schedel!!
Gracias,
Schedel Luitjen
Posted by Schedel at 18:27 No comments: 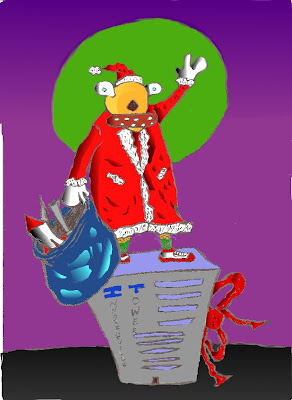 Follow the incredible adventures of Hero BLOB as he tries to defeat the villainous Devil Blob, save Christmas, and defeat the powers of Evil Christmas forever!!!

Please enjoy them both today!!!
Posted by Schedel at 10:37 No comments: 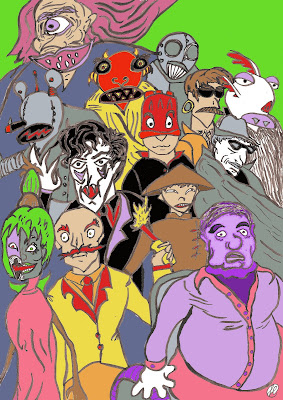 I write to you again today-- presenting the newly colorized 'Cavalcade of Villainy' drawing for your viewing pleasure!

Featuring almost all living (or, in some cases, UNliving) BLOB villains, including the newly-excavated Admiral Von Purpleheimer from Hero BLOB vs. Obakemono, it's a joy for the whole family!

Schedel
Posted by Schedel at 23:21 No comments: 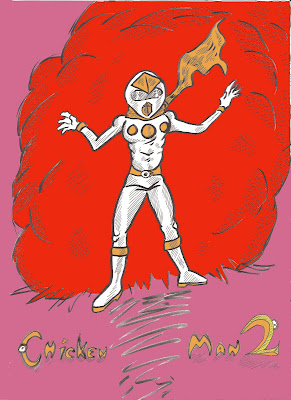 Sorry for a bit of delay in posting! To make up for it, here is a poster for the (still in the process of being written) Chicken Man 2: Flight of the Chicken Man!!

Although I'm home in Texas, rest assured that I'm still working on stuff! Fatman episode 1 and 2 are completely written, and more is on the way!!

In the meantime, enjoy this!!!
Posted by Schedel at 13:46 No comments:

Here's the new preview, made just for you-- a beautiful story, almost finished, featuring Santa, Satan, Hero BLOB, Devil Blob, and a whole range of the Cavalcade of Villainy! Enjoy the preview, and look forward to the real thing on Christmas Eve (or thereabouts)!! 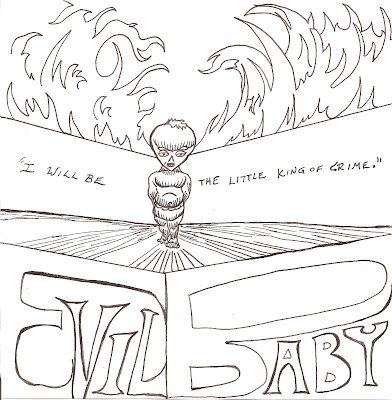 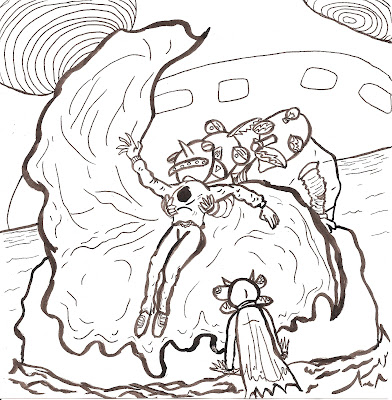 It's a busy weekend for BLOBniverse stuff! I've just scanned in the (as yet uncolored/uncoloured) previews for two upcoming Schedel Luitjen works! Both of these won't be around 'till 2012, so these are just here to drum up your interest!

Evil Baby tells the story of a criminal mastermind who becomes a child (for reasons revealed only in the story), while DAI-BLOB is the ultimate team-up of every BLOB ever to exist (so far) in one giant battle against the force of nature known as DAI-BLOB.

For continuity pundits out there, DAI-BLOB takes place after BLOB 12: Sinners in the Hands of an Angry BLOB. That's why BLOB has his nose back (OOPS SPOILERS). Look forward to them!

Schedel
Posted by Schedel at 10:53 No comments: 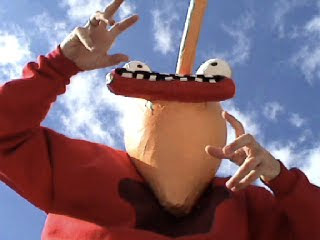 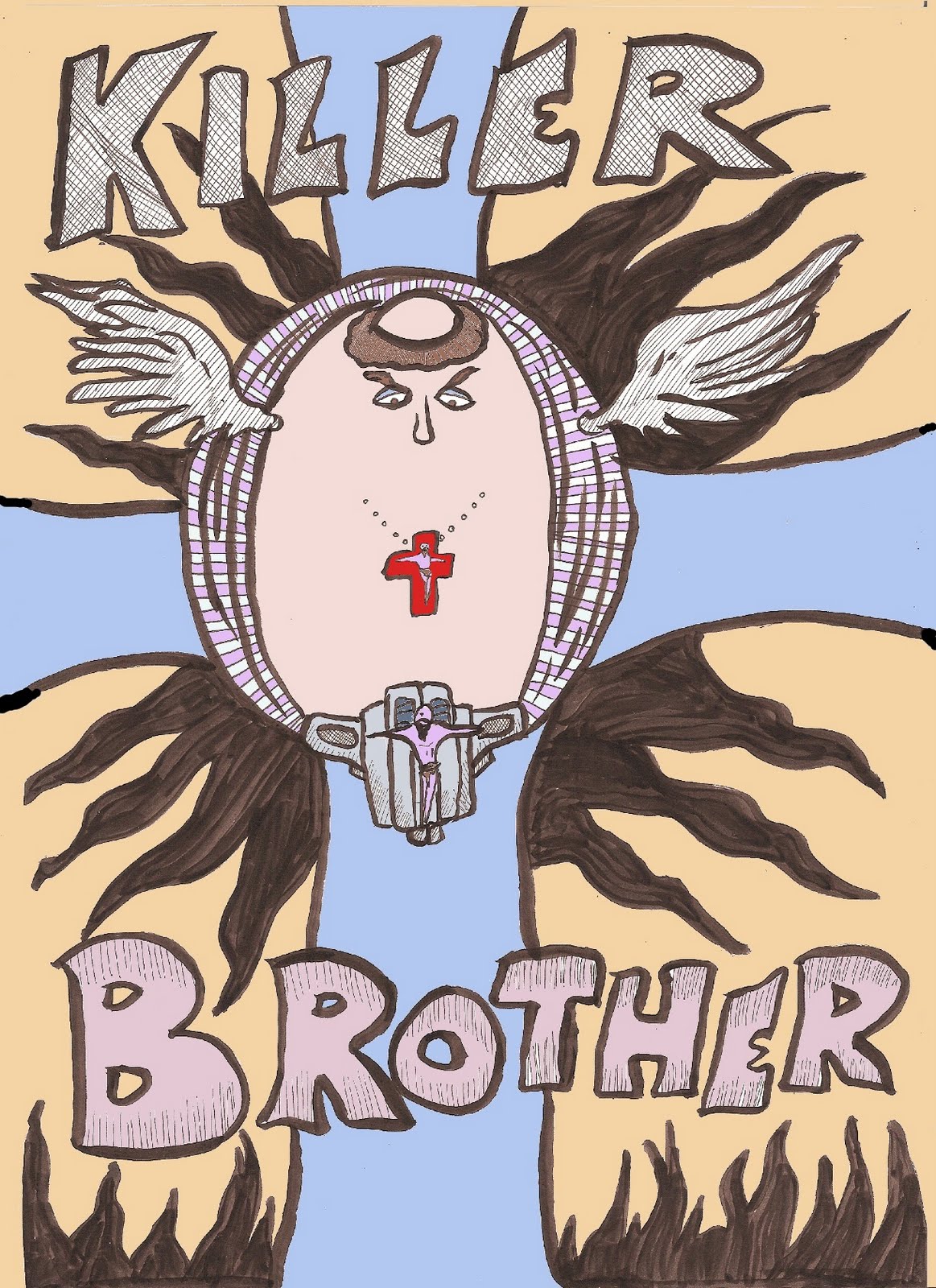 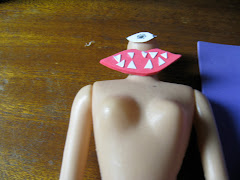 This is the form which Hag Lady Bobo's bodiless sould takes, in 'Hag Lady Bobo: Search for a Body'.

A capture from the stageplay Hero BLOB IX: Wrath of the Tuna Queen 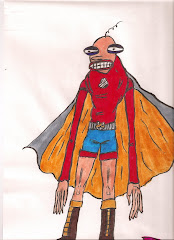